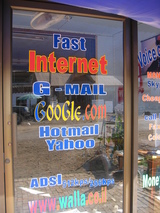 Today is a rest day. Some people are checking out caves, Mike and Rob are tubing down the river. I've decided to take the rest day seriously and do as little as possible. If nothing else, my knees need some time off.

A couple kids go by with goats on leashes. I guess this town is small enough for goats, but large enough that they'd be on leashes. Oh, wait, never mind. There go some free range goats. Every small town we go through, I see goats, chickens, dogs, sometimes cows and buffalo. I've seen very few leashes or fenced in animals. They just seem to wander around. I'm not sure how they (the people or the animals) keep it all straight, but I guess it must work out somehow.

At some point, I learned from Jason that our tour was designed for bicycles. I'd assumed it was a bicycle tour modified to give us shorter rides each day, but as he pointed out, there just aren't many towns along the way that could host a group this big. So we're essentially doing a bike tour on unicycles. Wow. We rock.

I got a massage last night and another one today. Today's was preceded by a foot washing and followed with tea. Ah, sweet decadence.

I haven't talked much about the other people on the tour. I think that's mostly because the things that make the best stories are the surprising and curious encounters with ordinary life in Laos, but my fellow travelers are a big part of the experience.

It's a large group. Look at this long list of names: Barry, Beau, Bruce, David, Florian, Gilby, Grace, Hans, Jason, Jesper, John, Ken, Mike, Nathan, Nick, Rob, Seth, Sid, Thomas, Tony. That's twenty people. Imagine picking out nineteen people, most of them strangers, and spending two weeks with them, doing something physically and emotionally challenging. We wake up before dawn, push ourselves hard each day, we only know a few words of Lao and the locals only know a few words of English, we eat strange food, and most of us have been sick for at least a few days. But somehow everyone is great.

That's a lot of people and a lot of personalities. It's a tribute to Jason that the tour went smoothly enough that we never turned on each other out of frustration, but it's also an impressive statement about each person here that, despite the challenges, we not only weren't getting on each other's nerves, but at least from my perspective, everyone was fun to hang out with! What are the odds?