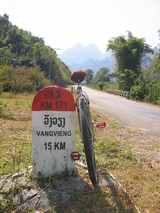 Today is a short day: 58km. We'll be in Vang Vieng by lunch, which is to say that we won't be given lunch on the road, so we'd better hurry up and get to Vang Vieng.

It's a hot day with one big hill and many others not worthy of note but still tough. I've found that the more hardcore riders can describe a day as "mostly flat" or "no serious hills" and it just means that there's no single hill that takes me more than twenty minutes to climb, but that I might still be going up and down all day.

I switched to the 140mm cranks last night, which for me are the short ones. Hans joked that you could keep a checklist of all hours in a day and check off each hour in which a unicyclist talks about crank length. If you read that and chuckled, maybe you should come on the next tour.

At first we thought maybe kids didn't go to school here. They all seemed to be hanging around all the time. Actually though, it was just a holiday. School is mandatory for kids until age 12, so even mid-sized villages have an elementary school. Secondary school, up to age 18, is optional, but only large towns have a secondary school. For most kids, the options are to stop at age 12, leave home and go to a big town, or become a monk and get some education at the local temple (but only for boys). Adding to the chaos, there's a shortage of either teachers or buildings, so in many places we passed, the kids attend school either in the morning or afternoon shifts, but not both. Once the holiday was over, it seemed like there were always kids on their way to or from school.

Today I was approaching a group of kids on bikes who were headed for school. (It's obvious when they're enroute to or from school, because they're wearing school clothes: white shirts with some sort of id patch and dark pants or skirt.) One of them called to me to stop and made the stopping motion with his hand.

I'll get back to the kids in a minute, but I have to mention the hand signal. This is one of those things you don't think about when you set out on a trip. You're standing on the side of the road and you want the bus to stop. What do you do? People are flexible, so you could probably flail around any which way and the driver would figure out that you wanted something, but there is a signal that means stop, just as there is where I come from. Only it's different here. There's no reason it would be the same. Sticking my arm toward someone and showing them my palm works great, but turns out to be somewhat arbitrary and not universal. So here there's another signal, and I'm glad I'd heard about it, because I go ahead and stop and talk to this kid.

The whole pack of them stops, but really it's just this one kid who talks to me. He speaks more English than most adults around here, so probably the other kids aren't up to joining the conversation. He's also bolder than most kids I've met. He asks me where I'm coming from, and in a brilliant flash of misunderstanding, I tell him Luang Prabang, since that's where we started riding. Only later do I realize that "America" would have been a better answer. We chat for a while. He asks me to come with him to school.

How cool would it be to go to a Lao school as an object of show and tell? "Look what I found in the road! He comes from America and rides a unicycle! Does everyone in America ride unicycles?" Unfortunately, blowing off the tour wouldn't work out too well. I'm pretty sure I could get a lift to Vang Vieng, but all hell would have broken loose in the meantime when my fellow cyclists noticed that I'd vanished along the way somewhere. I briefly lament being part of an organized tour, unable to wander off on tangential adventures, but of course I couldn't do this ride without support and wouldn't have come here at all without the group.

I expect to be more flexible in future travels, but I also won't be as obviously interesting. I'll be better able to exploit opportunities, but I'll have to work harder to create them. (Well, maybe not "work harder". This thing I'm doing now turns out to be hard work. But you get the idea.)

The kid asks for my phone number, which seems odd to me, but I go ahead and give it to him. He seems surprised at how long it is, and that's when I figure out that he thinks I've told him I live in Luang Prabang. Ah, well. Maybe he'll figure it out when he shows someone my phone number. I'm not expecting any calls, but you never know.

I'd guess the kids were about eight years old, but I've been misjudging kids' ages since I got here because of how small everyone is. Kids are small, adults are small. Back home I'm fairly short (172cm), but here I tower over nearly everyone. Even the dogs and cats are small here. I guess it's dietary.

Being in the back of the group is great though. I'm a relatively slow rider, and I'd worried that by the time I arrived anywhere, the wild reactions of the locals would all be used up. Ken said that the first riders elicit shock and gaping, but by the time a dozen have gone by, the whole town has been alerted and is standing outside cheering. I'm sure I missed something, rarely seeing people's first reactions, but on the whole, Ken was right. In many cases, by the time I show up, people have been called out and the crowds are ready. Wow.

Much of the time though, I think some people just didn't see the front of the pack. In the tiny villages, word travels fast, but anywhere larger there are plenty of people who simply didn't hear about the people who went by twenty minutes ago and who just happen to be in the right place at the right time to see me.

Somewhere along the ride today I saw a kid with a pet monkey. It was clinging to his side. He wasn't much bigger than the monkey. I've seen a few blond kids too, which seems odd. I wonder what the story is there.

So now I'm in Vang Vieng. 58km, and I rode the whole thing, so I guess I had another sag-free day after all. My legs, muscles and joints, feel worked over, but now we have a rest day. The end of the ride was pretty neat. The main road in this part of town -- and here we see that this town is large, simply by virtue of having more than one road -- is under heavy construction, so it was real off-road riding. Much fun.

One odd thing about this place though is that it's full of tourists. It's strange and disappointing to see them. We've spent the last two days on the highway, but still in the middle of nowhere, being places no one ever stops. I know it's hypocritical to want to be a tourist in places there aren't any, and it really doesn't scale up to the global tourism demand, but it's also more fun. But I've gotten that in all the tiny roadside villages along the way. Cycling from town to town is a lot of work, but it's worth it. The best adventures are in the in-between.