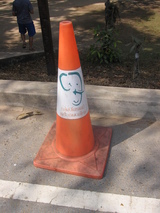 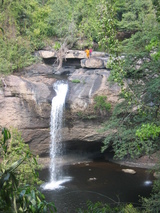 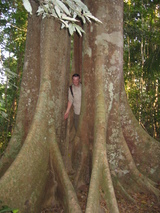 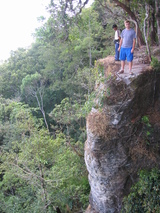 Today Gilby and I hired a guide who took us around Khao Yai National Park. He only spoke a couple words of English, but we were told he knew the park pretty well. After fetching us from our hotel, he stopped at his house to install benches in the back of his truck, and that's where we spent our time when we were driving from one part of the park to another.

At first we were just making our way into the park. Or rather, our guide was making all of our ways, since he was driving the truck while we enjoyed the fabulous weather and scenery. We talked about how it'd be nice to bike through the park, but with the endless hills it would have been a frustrating day on unicycles.

We hiked out to a wildlife observation tower. No wildlife in sight, but it was pretty. We did see a couple very large insects buzzing around. I joked that these would probably be the largest creatures we saw all day, but then just ten minutes later, hiking back from there, our guide demonstrated his superior powers of observation and one of his few words of English. He pointed to a cluster of trees and said quietly but excitedly, "elephant".

It sounds a bit silly that an elephant had escaped our notice. In our defense, it was kind of far away, but really we're just city bumpkins who could stumble blithely past, well, an elephant. He appeared to be foraging, which I guess is a full time job for someone who eats 20kg of food every day and who can't get seated at a restaurant. I had heard there were wild elephants in the park, but I hadn't expected to see one. As one local said later when he was telling us how lucky we were to have seen an elephant, elephants are big, but the park is really big.

We spent the day hiking all over the park, seeing waterfalls, rivers, various animals, and lots and lots of trees. We saw gibbons by the road and in some open areas, but mostly we heard them. They're very loud and have a few distinctive whooping sounds.

All day our guide kept spotting interesting animals before us. We could have hiked around without him, but I don't think we would have seen anything larger than that bug. At one point, I walked off the trail a bit to take a picture of a neat tree across the river. Our guide beckoned me back and with big chomping motions of his arms, explained that there were crocodiles. A few minutes later, we saw one. Or, I should say, he saw one and pointed it out to us. But in any case, we saw lots of neat stuff in the park.

To the Bat Cave!

At some point we'd had enough of hiking in the woods and seeing odd trees and beautiful waterfalls, so we left the park and drove out to a bat cave. Word on the street is that this cave is home to three million bats. Every day at sunset, the bats wake up and go out for breakfast, and this we had to see. I guess it must be a big cave to hold three million bats, but the entrance is a small hole. As a result, it takes about an hour for all the bats to exit. I can imagine the fire marshal coming by for an inspection and posting a sign "roosting capacity: 200000 bats", but in the meantime, the exodus is a lengthy spectacle.

The evening flight is especially interesting because all the bats are heading in the same direction and they exhibit flocking behavior. So instead of just a big cloud of bats dispersing from the bat hole, we watched a ribbon of bats pouring eastward like a viscous fluid.

A few predatory birds enjoyed the buffet, which shook things up a bit, but it didn't last long, and mostly the bats just twisted on toward whatever insect bonanza they'd been dreaming about all day.

Their path was interesting though. I guess their flocking algorithms take into account the bats behind them, because transverse waves propagated through the stream of bats, moving faster than the bats themselves. I managed to get a video that captures this pretty well. It was hard to tell from the ground, but I think the waves were actually in a corkscrew pattern. You probably can't hear them in the video, but the bats sounded like a distant swarm of bees.

Sadly, the end of the day saw us back in Bangkok. But we took the bus there, which was a nice change of pace. Neither of us had taken an intercity public bus yet, and it was kind of fun.