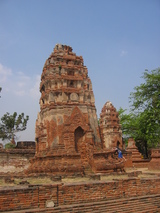 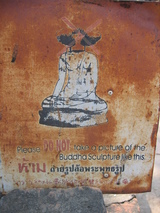 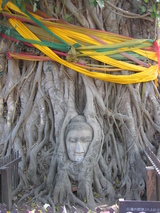 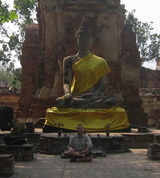 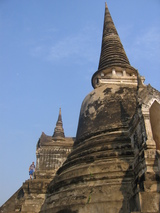 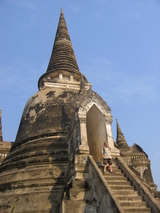 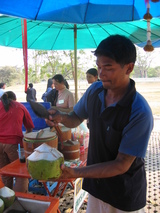 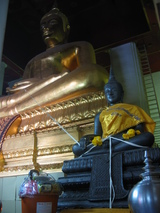 Gilby and I left most of our gear in our cheap hotel room in Bangkok and hopped on a train to Ayuthaya, the ancient capital of Siam. The plan was to spend the day there biking around the ruins, then to get ourselves somewhere near Khao Yai National Park, spend the night over there, and spend the next day in the park somehow. We didn't have many details worked out, but figured we could always get back to Bangkok if we had to.

The day in Ayuthaya was pretty much what we'd hoped. We rented bikes, enjoyed how easy they were, and went from one ancient temple to another, clambering around and taking goofy pictures.

Setting up plans for the next day was trickier. We called the park, since they had places one might stay, but we didn't speak any Thai and they didn't speak enough English, and though they passed the phone around a few times, they eventually gave up on us. No problem. Plenty of other places.

We had no communication troubles with the next one we called, which turned out to be important, because she pointed out that her hotel was on the south side of the park, so instead of taking the train to Pak Chong, we should take a bus to Wananoi and then to Prachinburi. Ok, no problem. So we find the bus station, get the bus times and buy tickets. Or at least we would have, but the woman at the station told us that we couldn't get there from here, and that we'd have to go back to Bangkok. Hmph.

So we called a third place. That seemed to work, though the person we talked to wasn't clear on how we would get to the hotel from the train station. There was some sort of bus, but it wasn't clear how we would find it. We decided not to worry about it until we got to Pak Chong. We'd find a way.

So we had our day in Ayuthaya. We saw ruins, we saw tourists touring the ruins on rented elephants, we saw dogs and motorbikes and strange food, and we even went to the Elephant Corral and saw some elephants being cared for.

Ah, but the strange food! When hunger and dinnertime struck, we found a market and wandered through it. We discovered colorful coconut confections, rice pudding, and a bizarre looking treat that turned out to be a cotton candy crepe. I even bought a couple neat looking shirts "at Thai price, not tourist price". Yeah, sure, whatever. She was friendly, and at $5/shirt I'm not going to lose sleep over how much extra she charged me.

I had fun racing a couple girls on a motorbike over the bridge. Bikes sure are easy and fast, even really crappy ill-fitting bikes.

Dinner was also entertaining, thanks to an outgoing restaurant owner and chatty backpacker clientele. The owner liked to talk about American rock music, but was even more enthralled by puzzles and practical jokes. I failed to get the metal ring off the thing or the rubber band off my hand, but I didn't fall for the wound up thing that jumps out of the card or the jiggly rubber turd in the bag. Good times.

Back at the train station, everyone was watching TV. A soap opera, I think. Our train eventually turned up, and off we went. My main activity for the three hour ride is to wonder what we're going to find when we get to Pak Chong.

All I know about this place is that it's the closest train station to the national park. Is it a large town or just a supply stop? All day I'd had visions of arriving in Pak Chong: a dusty, one-bench station, completely abandoned when we arrived at midnight. Unable to call a taxi or even read street signs, we'd spray ourselves with mosquito repellent and sleep on the floor of the station.

Gilby points out that if we miss our stop, we'll just end up somewhere unexpected, and if we stay on until morning, we'll be at the Lao border we never saw. Not exactly dire consequences.

Around the time we were due to arrive in Pak Chong, the train stopped in the middle of nowhere and we tried to figure out where we were. Were we there? How would we know to get off the train? Was there even a station? Were we at one? We peered out the windows in vain. Eventually we started moving again, and we stared hard to see where we were. All the other passengers were asleep. Suddenly a sign creeps by the window: "KLANGDONG". We struggled to contain our laughter.

A few minutes later, the conductor came by and told us our stop was next. It's occasionally handy being an obviously helpless and clueless tourist.

The reality of Pak Chong was quite different from what I'd imagined. It was a bustling city, even at midnight, and its train station is far from empty and dark. We got directions to a taxi, which may just have been directions to the main road. No taxi forthcoming, we walked a bit and asked around. We got offers. There are always offers. Eventually we agreed to pay someone 300B to drive us to our hotel.

I don't come from a culture of haggling, and I find it really irritating. Every transaction starts with an adversarial relationship, and I have to assume that in each case someone didn't get a good deal. Since I'm the one just off the turnip truck, I have to assume that's me. So every time I buy anything, I'm left wondering just how much I got taken for, and how much I'm contributing to the reputation of the stupid foreigner who will pay a laughably exorbitant $5 for a handmade shirt or $7.50 for a 20km ride out of town. Once I do the math and put it in dollar perspective, I don't care so much, but it often bugs me at the time.

It's not really about the money, it's about feeling like the sucker in every deal. Of course, they're suckers too, since I'd have been happy to pay twice as much. But it still irks me, this constant arguing. Always accepting the first price would solve that, and I do that for a lot of small purchases, but I've seen the first offer be five times the going tourist rate, and that's a bit much, regardless of what the money means to me.

In this case, I didn't know what a good price would be, so we just went with the second guy's offer.

I felt a little weird about paying some random guy for a lift and was counting on him to be honest. I'm told that in other parts of the world, this would result in being left naked in the middle of nowhere, all of our stuff stolen. I watched my GPS during the ride so I could see which way were were headed, note distances and directions back to civilization, and generally keep an eye on what the driver was doing. I do this for cab rides sometimes too, but the stakes seemed a little higher tonight. But this guy was just happy to make some extra money and took us right to the hotel. It turned out the hotel was 20km from town, so we'd gotten a good deal after all.