In the morning we unicycle to the pier and load up a very long boat with all our gear. The unicycles get tied down on the roof, which we all thought would make a great "unicycles in Laos" picture.

We'll be spending the next two days on this boat, which sounds like it could be really boring, but it turns out to be wonderfully relaxing. There's just enough to do: read, stare at the beautiful scenery, talk to people, eat, drink, be merry, play cards, nap, etc.

The most popular river activities seem to be fishing (mostly with nets) and panning for gold with bowls that aren't all that different than the local hat. I'm told that gold panning is not a well-paying hobby, but I guess it beats not panning for gold. 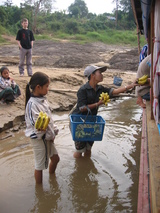 Our boat had to stop in a small village for administrative reasons I didn't understand, but it provided plenty of entertainment, both for us and for the children trying to sell us bananas and tamarinds. Bananas are plentiful here and are sweeter than the bananas I get back home. Someone told me that all the bananas we eat back home are one of many species of banana, and that breed was probably chosen (perhaps developed) to survive the rigors and ripening schedule of long transit, rather than for its great taste straight off the tree.

Our final stop of the day was Pak Beng, where we'd be spending the night. Another town, another place to unicycle. Before we'd even checked into the hotel, I saddled up and headed up the road. (In Pak Beng's case, "the road" really does refer to the one and only road in town. I wasn't about to get lost.) 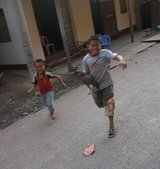 Somehow it was even more fun than riding through Huay Xai. Lots of wide-eyed children, everybody waving and saying hi ("sabaidee").

Early on, I was chased by a couple kids, and one of them was inexplicably holding a chicken. I managed to get a picture. Most of the pictures I take over my shoulder while unicycling come out about as well as you might expect: the ground, the sky, a blurry elbow, the barest edge of a perfect and memorable scene and everything out of focus, etc. It's always a treat when one actually comes out.

Eventually I decided I'd better turn back. Everyone was probably checked into the hotel by now, and I'd left my bags sitting out front. Later I heard from Ken and Tony about the awesome time they had drinking mysterious booze with the villagers, just around a few more bends in the road.

By the time I'd finished my three months of training rides, I told myself "never again". Never again would I put myself through that. But after just the 6km ride today, riding easily and even mounting well, I feel like I could sit in the support truck the rest of the trip, bask in the memory of today, and be happy. It was all worth it. Easy to say now, but that's how I feel in the moment here with the training behind me.

Electricity was intermittent, as promised, but I timed it just right and had a hot shower. Yay!