A devil's triangle is like a devil stick, but instead of being a stick, it's a triangle. Simple, no? I first made one of these in June 1997. It's my own invention, and it's extremely difficult to use. I'm not very good with it yet (I don't practice enough), but I can make it do a few things. 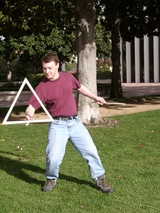 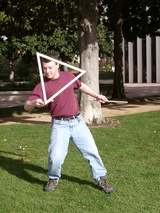 Olivier Caignart and I made a video, the first half of which is devil's triangle tricks.

How To Make One

People have been asking me how to make one, so here's some basic info about the pieces.

It's three identical pieces of 1 inch thick PVC. Each one is 50cm long, including the pointy ends. The ends should be 60 degrees off square, which means the angle of the points is 30 degrees. (I used a manual miter saw to cut those angles, but I had to make a jig because it only went down to 45 degrees.) Getting the two ends of each strut to line up was a bit tricky, but it's kind of hard to explain, so you're on your own. :)

As for putting the whole thing together, I just use strong tape that has threads running through it. With enough tape (three or four pieces on each side of each vertex), it lasts for several hours of use. When it shears or starts to get loose, I just peel it off and retape it. It easy to take apart for travel, which is handy.

Here are some pictures of an old wooden one, which I don't use anymore. It was more work to make, too heavy, and was harder to travel with. It was a lot more sturdy though.