Today is my last day in Laos. My visa says I can stay one more day, but I think it's time to move on. Also, I already have a train ticket, though in the end it didn't matter. 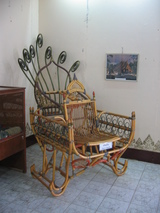 It took a couple tries, but I finally managed to visit the Lao National Museum, an odd little display of the important and trivial, true things presented in over-the-top communist propaganda style that I thought only existed in parody.

I jotted down the text of a typical sign, this one adorning a couple guns: "These weapons were brought by American imperialists to kill the Lao people." I don't doubt it, but it's not the phrasing I usually see in a museum. Most of the exhibits were like that. Refreshingly direct in the case of the weapons, but in some cases it got a bit silly. Every action was firm or bold, and even the lowliest trinket was "used in the fighting against the American Imperialist".

Leaving Laos from Vientiane is simple. If you get on the right bus, it'll take you all the way to Thailand. Or you can take a taxi to the border, take the shuttle across the bridge. If you want to go farther into Thailand, say to Bangkok, you'll take the train, which is full and for which you should have made reservations days or weeks ago. I did, so I have a train ticket, but Gilby didn't.

This sounds like it's more Gilby's story than it is mine, but it's not that easy to keep me out of a story. Neither of us have any plans for our last few days, so when it looked like he wasn't going to make it back to Bangkok by train, he started looking into cheap flights, and at that point we both started to question the destination. If he's going to fly, he could fly somewhere else. And if he can do that, so can I.

But in the end, Bangkok looks like the best choice, mostly due to cost and flight schedules. There's one more flight leaving today, and it leaves in an hour. It's too late to book remotely, he'll have to just go to the airport and try for it. Meanwhile, it's time for me to head to the border to catch my train. But do I want to sleep on a train tonight or would I rather sleep in a bed in Bangkok?

So off we go to the airport. If this doesn't work out, I'll have missed my train, but dashing off to the airport at the last minute sounds like too much fun to pass up.

The airport is entertaining. It's small. Even the x-ray machine is small, and it can't cope with my enormous wheel bag. At first they're not sure how they'll deal with Gilby's credit card, since the guy who knows how to work that machine isn't there, and he's not sure who can unlock it anyway. But somehow it all works out. We spend the last of our kip on overpriced airport ice cream and we get on the plane.

The plane is an ATR-72-202, which I'd never heard of. I think the maintenance crew hadn't heard of it either. It's a turbo prop, and it was the noisiest plane I've ever been in. It vibrated madly the whole way to Bangkok. Humming to myself in my seat, I could get some neat dissonance effects. I didn't notice the tail number, but poking around online, it looks like Lao Airlines owns two of those aircraft, purchased 13 and 14 years ago.

I wonder what the most dangerous thing I did on my trip was. Was it biking in Bangkok? Unicycling in Vientiane? Riding this plane? 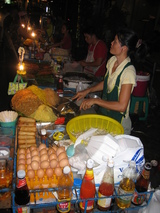 Oh, joy. I'm back in Bangkok. On the bright side, the food is good.