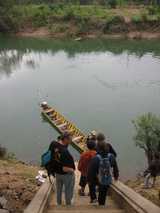 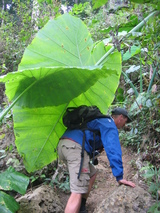 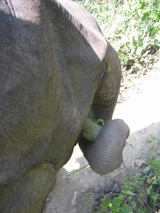 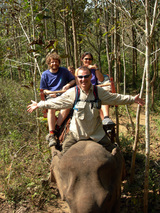 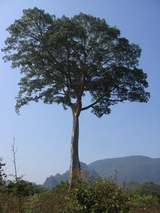 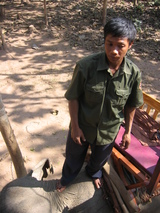 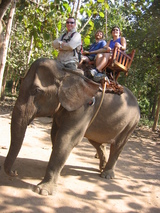 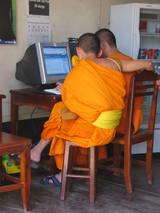 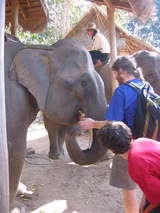 Originally the plan was to ride to another waterfall today, but it's the dry season and the water isn't falling much, so instead it's a rest day. I scoffed at the idea of a rest day after just one day of riding, but to be honest I'm happy to take a day off after our warmup.

So now the plan, at least for some of us, is to ride to a nearby village and see a bunch of crafts in action, on display for the tourists, but still legitimate work. There's a weaving center ("from worms to weft!" their slogan could, but probably shouldn't be), a silversmith, and a place where they make machetes out of scrap metal.

There's not a single part of this I'm not interested in, except the part where I have to get out of bed. Bed wins, as it often does, but when I do finally haul myself out into the world, I'm just in time to join some other plans that earlier risers have set in motion.

Nathan, Grace, Beau, Thomas, Jesper, Sid, and Gilby hop in a van, and Rob and I volunteer to ride in what looks to me like a miniature sangthew, but other people are calling a tuk-tuk, despite its four wheels. (Could it be the fabled jumbo?) Twenty breezy minutes later, we're at the river, where we clamber into a couple single-file leaky boats with outrageously long outboard motors, and skim upriver. Lunch, a short hike past outrageously large leaves and frighteningly large spiders, we arrive at the main attraction: the elephant ride!

Yay, elephants! We wait a few minutes for some locals to have a short ride, and then its time to board the beasts. Each howdah fits two people and we have four elephants (how cool is that phrase? We have four elephants!), so after a couple elephants have been loaded up, I'm standing on the loading platform with the rest of the gang and one of the mahouts asks for a volunteer to ride on the elephant's neck.

I was pretty nervous, but I kept one hand on the howdah for the first 20 minutes or so until I got used to it. Eventually I figured out some technique, but I was never comfortable enough to shift my position very much, so really I wasn't doing it right. Next time I ride an elephant, I'll be so much better!

It was extremely cool, by which I mean "Yeeha! I'm riding an elephant!" My brother once rode a camel around the pyramids in Egypt, and he said the camel was more interesting than the pyramids. I can relate. I was sitting on my elephant's shoulders, so as she slowly lumbered, I could feel the bones shifting to and fro under my butt. Her skin was tough (except for right behind the top of her ear) and the top of her head was littered with a sparse grove of short spiky black hair. Every now and then she'd flap her ears a few times, and she'd be flapping them against my legs. I got some video. Once I felt more stable, I let go of the howdah and kept my hands on her head.

At one point, my elephant found something tasty by the side of the trail and nabbed it to munch on. I can only imagine that if I could chew up a small tree, it might make the same amount of noise, and if someone were riding on my head at the time, they too might be in for an eyebrow-raising ride.

It looked like the real mahouts were using their legs to tell their elephants where to go, so I tried doing that just to see what would happen. Mostly, when my elephant started to go off trail, I'd nudge it back. But would it have done that anyway? Only one way to find out! The trail split and the two elephants in front of us went left, and I tried to tell my elephant to go right. Left it is! I guess my gentle nudging doesn't count for much when there's a leader to follow.

One of the services provided by the real mahouts was to show me just how good I wasn't at riding an elephant. They rode hands-free. They sat cross-legged on top of the head. They turned around and rode backwards. One of them, sitting atop the head of a walking elephant, had his head down and appeared to be taking a nap.

We fed them some sugar cane treats and went home. Ah, the day of the elephant ride. We saw a couple elephants-for-hire on the ride to Kuang Sii yesterday, and due to a minor miscommunication, we were told we could buy one for $10,000. I'm not sure if that was an offer or merely information, but it was amusing in any case since we meant to ask how much a ride would cost. Today we learned that an elephant costs about $5,000/month for care and feeding, so it's probably good that we didn't buy one yesterday.

The price and costs are interesting though. It's as if you have to put down a two month security deposit on an elephant, but that they're otherwise free for anyone who can pay the upkeep. It's a lot like moving into an apartment: you pay a deposit, you pay the monthly rent, and although you think you can get your deposit back when you move out, you never do. What's the depreciation schedule for an elephant?